Experience safe NAD for St. Louis Addiction Treatment detox from serious or continuous drug & alcohol abuse at our NAD Treatment for St. Louis Addiction Treatment Center. NAD stands for Nicotinamide (Nick-o-tin-a-mide) Adenine (Ad-a-nine) Dinucleotide (Di-nuke-tee-a-tide). NAD is an essential molecule found in every cell of your body. This metabolic co-enzyme that builds, repairs, and is a fundamental piece of energy production (mitochondrial function); heavily involved in DNA repair and cell repair; responsible for turning certain genes on and off; and fundamental for maintaining neurotransmitter levels, for the appropriate operation of the brain. News Spring Wellness Center provides the best rated NAD IV Therapy when you are searching for NAD Addiction Treatment in NAD Treatment St. Louis near me. Read more or contact us about NAD IV Therapy For Addiction

WHAT IS MISSING IN THE TREATMENT OF DRUG AND ALCOHOL DEPENDENCE?

Abstinence, psychological support and switching to other drugs are generally all that are used in drug treatment, in hopes that the brain will progressively repair on its own from the chemical harm. While some degree of brain healing will usually occur after reducing or discontinuing drug or alcohol use, very often the natural healing is minimal, and the person suffers with continuing emptiness, anxiety, depression, insomnia, cravings, pain, brain fog and/or fatigue.

NeuroRecover therapy involves several days, usually without interruption, of daily intravenous therapy. The IV formula is given as a slow drip, requiring about eight hours every day for the first few days, and often less hours towards the final days of treatment.

The lengthened everyday exposure to high levels of amino acids designed to dramatically penetrate the brain allows the patient who is still using drugs or alcohol to safely stop these substances completely (“cold turkey”), with few exceptions, on the first day of therapy. While some withdrawal symptoms are sometimes felt, nearly all patients find that it is much simpler than doing it without the assistance of the amino acids.

Patients find that the considerable negative effects of drugs or alcohol use, such as cravings and anxiety, are gone by the fourth to sixth day of treatment. The second phase of restoration takes over at this point getting back one’s enthusiasm, memory, mental clarity, sleep quality and energy. Your doctor will help you determine how many days of treatment are needed for the best, lasting result.

Contact us or call us at 573-693-1977 for information regarding NAD Treatment for St. Louis Addiction Treatment

The simple act of aging and oxidative stress can deplete crucial nutrients and building blocks for a healthy brain. This leads to symptoms such as anxiety, emptiness, brain fog, physical pain, depression, lack of motivation and sleep complications. Our intravenous formula consists of unique combinations of a few select amino acids in a base of NAD that are specifically designed to assist the nervous system in repairing those receptors.

St. Louis is the second-largest city in Missouri, United States. It sits near the confluence of the Mississippi and the Missouri Rivers. As of 2020, the city proper had a population of 301,578, while the bi-state metropolitan area, which extends into Illinois, had an estimated population of over 2.8 million, making it the largest metropolitan area in Missouri, the second-largest in Illinois, and the 20th-largest in the United States.

Before European settlement, the area was a regional center of Native American Mississippian culture. St. Louis was founded on February 14, 1764, by French fur traders Gilbert Antoine de St. Maxent, Pierre Laclède and Auguste Chouteau, who named it for Louis IX of France. In 1764, following France’s defeat in the Seven Years’ War, the area was ceded to Spain. In 1800, it was retroceded to France, which sold it three years later to the United States as part of the Louisiana Purchase; the city was then the point of embarkation for the Corps of Discovery on the Lewis and Clark Expedition. In the 19th century, St. Louis became a major port on the Mississippi River; from 1870 until the 1920 census, it was the fourth-largest city in the country. It separated from St. Louis County in 1877, becoming an independent city and limiting its own political boundaries. In 1904, it hosted the Louisiana Purchase Exposition and the Summer Olympics. 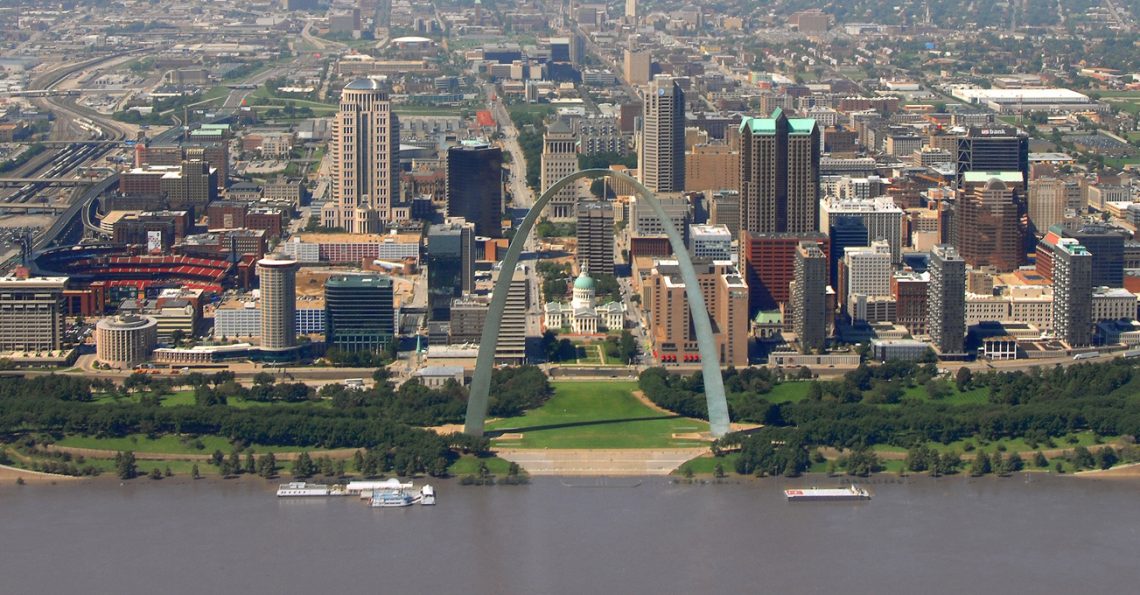